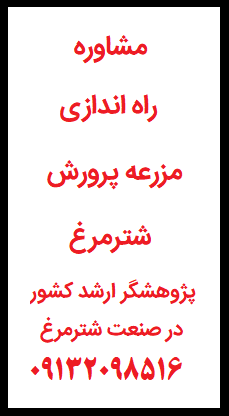 The farming of ostriches is well established in South Africa and is gaining in popularity in agriculture around the world but few scientific data are available for rates of egg production and the factors affecting incubation and hatching. Production and hatchability of over 1200 ostrich eggs on a farm in the United Kingdom were recorded during the 1995 season. Females of breeding ages (no. = 43) were kept in 13 enclosures in sex ratios of 1: 1 or 1: 2 (M: F). Productivity of all ostriches over the laying season was 25·2% although when results from individual enclosures, and from individual birds, were examined higher rates of production were achieved although only one bird achieved her full laying potential

As group size increased productivity decreased. Overall fertility was 78·7% although fertility greater than 90% was achieved by females kept in pairs or trios. Larger group sizes had lower fertility. Mean weekly hatchability was only 24·1% with hatch of fertile eggs being 31·9%. Maximum hatchability of eggs produced from an individual female was 73% of fertile eggs. Microbial contamination of eggs was 32·6% and this was the biggest cause of failure to hatch, although rates of contamination varied between females. These results for productivity are similar to those published for ostriches in Israel and South Africa. Hatchability is lower, and microbial contamination is higher than published information although this is the most comprehensive study of ostrich production yet published. Future development of ostrich breeding programmes needs to concentrate on small breeding groups, preferably pairs, and on improvements in nest site hygiene and post-laying egg management